Software Testing Trends to Look out for in 2023 | Testworthy

Share
Share
Testing is a crucial part of the software development cycle. Dedicating the right time and resources to Quality Assurance (QA) processes helps you create excellent software products and increase customer trust. As technology evolves, so do testing practices, test case management, and test execution. Companies need to stay up to speed with the latest testing methodologies to remain competitive. Here are some of the leading trends in testing to look out for. 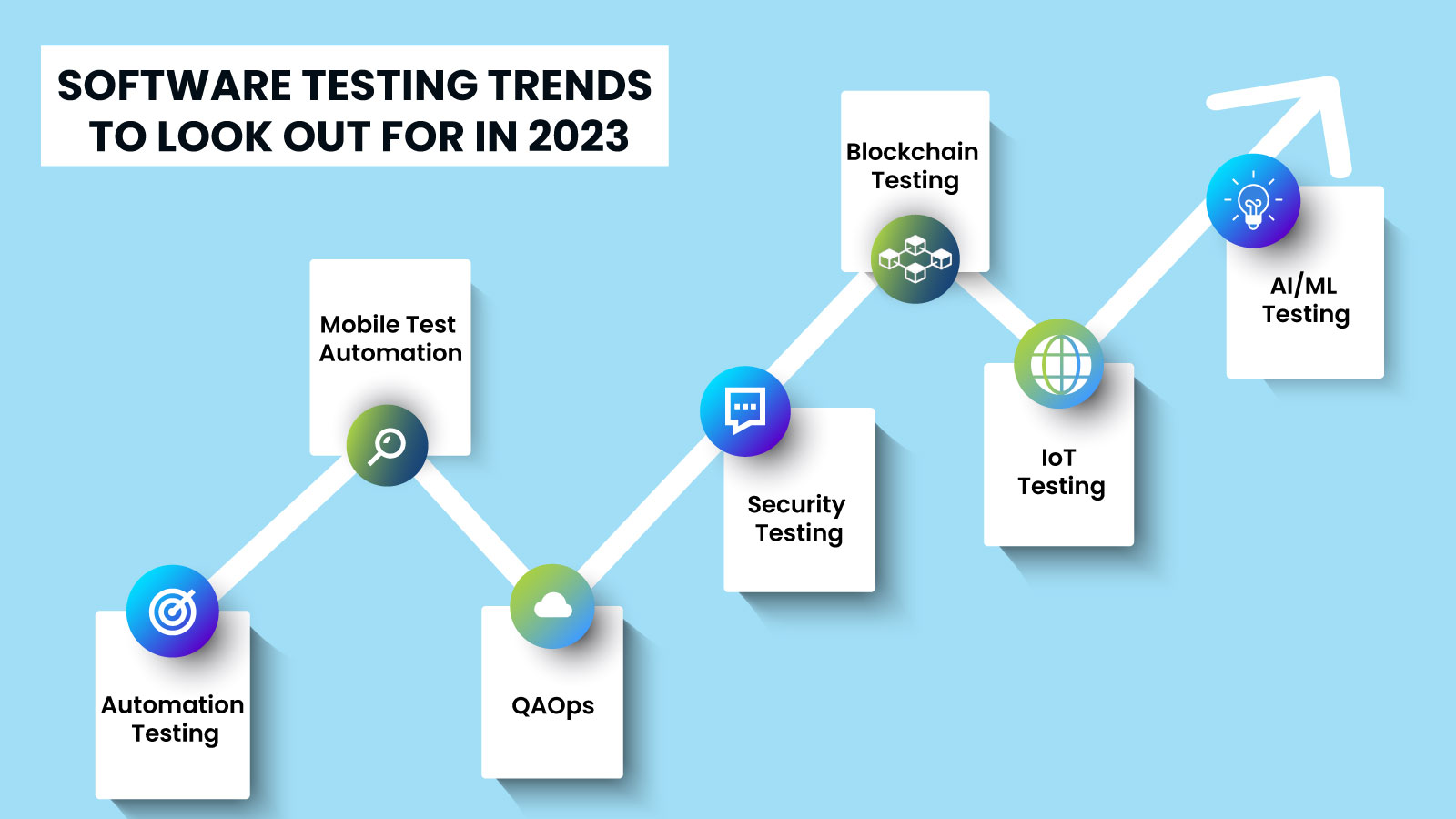 Automation can save testers significant time, money and effort in cases where manual testing proves to be time-consuming, dull and repetitive Many organizations are still widely reliant on manual testing, but the adoption of automation is growing. Testers need to develop skills to create and manage automation strategies, be hands-on with automation and CI/CD tools and frameworks, write automation scripts, have a good grip on programming languages, and know effective test case management. They should also have the flexibility to learn and employ newer testing practices such as AI testing and codeless testing.

To keep up with the fast-paced advancements in mobile technology, test automation for mobile is highly needed. This involves automated software testing for native apps, mobile web apps, and hybrid apps across different devices, network operators, and operating systems. With every new version or technology update, mobile apps need to be tested to ensure that existing functionality is not affected. Test automation can be useful across multiple aspects of mobile testing such as testing for usability, performance, interface, and compatibility with different browsers and devices. Adoption of test automation in mobile can speed up testing and increase coverage for the release of high-quality mobile apps and software.

QAOps refers to combining DevOps with the QA function to enhance collaboration between development, IT, and QA departments. Under this practice, QAs work with clients and developers from the very start, discussing requirements, identifying critical test cases and planning testing strategies. By including shift-left testing, i.e., testing earlier in the software development cycle, bugs and issues can be found and fixed before they cause any significant losses. QAOps employs continuous testing and increased automation. This allows for faster and more frequent releases of software and decreases time-to-market while preserving quality. Future trends will see greater adoption of QAOps and related practices.

Cybercrime is rising. Hackers can easily break into a company’s systems, steal information, alter files and damage business assets and reputation. Reliance on cloud solutions has also exposed companies to more security threats. This is why security testing has become more important than ever. Security testing involves testing applications and utilizing ethical hacking to find security risks, internal faults, and points of weakness. Finding security loopholes beforehand means organizations can take timely actions to protect their systems and prevent cybercrimes. Hence specialization in security is an increasingly important area for testers to build their skills.

A blockchain is a public distributed digital ledger that consists of chained blocks of duplicated data that cannot be altered. Blockchain is used extensively in cryptocurrency systems to maintain secure digital transaction records. Organizations worldwide are adopting blockchain due to the high level of security and transparency it offers. Since blockchain is a recent technology, there is a lack of testing tools, expertise, and best practices for blockchain testing. There is an increasing need for testers who have knowledge of blockchain technology and can decide the right tactics for blockchain testing, create strategies, identify critical focus areas, and perform functional and non-functional testing as needed.

Internet of Things (IoT) is an emerging technology of the 21st century. IoT refers to smart objects embedded with sensors and software that can exchange data and connect with other devices. Examples of IoT devices include thermostats, smart home security systems, and wearables like smartwatches and fitness bands. IoT testing can be complicated and involves multifaceted testing across various sensors, devices, networks, and applications. Due to the multiple stages and dependencies involved in the IoT testing framework, IoT can be tough to test. Testers need to ensure that all layers, connected devices and software work together flawlessly. As IoT devices continue to pour in the market, there will be a great need for IoT-based testing experts.

The use of Artificial Intelligence (AI) and Machine Learning (ML) in test automation has the potential to disrupt the testing landscape. With AI/ML technology, machines use data learning to acquire human-like behavior and skills. As we shift towards increased automation, the next phase as testing evolves is intelligent automation, i.e., using AI in testing. AI-enabled technology can assess testing priorities and decide what tests to run. It can also automatically create test cases based on previous test case examples, automate manual test cases and modify tests in case of UI changes to prevent test failure. The future will soon see the advent of self-healing software that detects and corrects its own problems and removes human interference from the equation altogether. The use of AI/ML in testing is still in its beginning stages, but there will be a rising demand for people with expertise in this area.

As technology evolves, so will testing and development practices. QA testers and businesses need to keep up with the changing tech landscape and be aware of the trends that will impact the future of testing. With technology becoming increasingly complicated, there is scope for specialized expertise and niche skills in certain new areas. It is essential for testers to be aware of these and obtain the necessary skills for success.